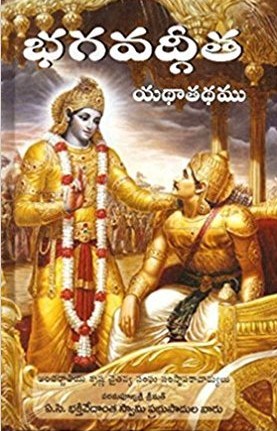 About The Book – Bhagavad-Gita As It Is [Hardcover] Telugu is a Telugu translation of the Bhagavad-Gita As It Is, which is the world’s primary source of information on yoga and gives you an overview and a explanation of Indian Vedic knowledge. Set in an ancient Indian battlefield, Arjuna the warrior begins to question the reason for the war he is about to wage against his own kin. His mind wanders off on an existential train of thought and he beings to question the true meaning of life.The Bhagavad-Gita As It Is is a collection of the pearls of wisdom that Lord Krishna bestows on his friend and student, Arjuna. Arjuna’s spiritual teacher, Krishna, eases Arjuna’s mind leading him away from a confused state of mind and down the path of enlightenment. Arjuna begins to learn about transcendental wisdom and bhakti-yoga, dhyana-yoga, jnana-yoga and karma-yoga.Arjuna sees life differently when he learns about the benefits of devotional servitude. He gains knowledge of the absolute and about the various natures, like the divine and demonic natures. He also finds out about the three forms of material nature from Lord Krishna. Key Features – The book is a revised version of its original 1968 edition and has been translated into almost 60 languages till date. The book has been translated in such a way that the writer’s opinions have not influenced the text, letting you derive your own understanding of the text. About the Author: HDG A. C. Bhaktivedanta Swami Prabhupada is considered to be a leading Vedic translator, scholar and teacher of the modern world. Born in 1896, he founded the International Society for Krishna Consciousness and is the spiritual teacher of the society. He has also translated and explained the Srimad Bhagavatam Full Set 18 Volumes (Telugu). He was mentored by Srila Bhaktisiddhanta Sarasvati Gosvami, ever since he met him in Calcutta in the year 1922. Srila Prabhupada, as he is called by his disciples, passed away in 1977.